After capping off a record $2.3-billion year of transactions, Brisbane’s booming industrial sector is tipped to double its pipeline this year.

It is the third consecutive year the city has broken its transaction record.

A CBRE report on the city’s industrial and logistics results in the fourth quarter showed a strong appetite for speculative developments, as investors looked to capitalise on occupier demand.

“New supply is forecast to increase significantly in 2022 and reach around 683,669sq m—surpassing the 10-year annual average and over double the 2021 total,” J-Baleh said.

“Approximately 64 per cent of the 2022 supply pipeline is already under construction.

“There is a relatively large supply of speculative floorspace due for completion in 2022, with 325,705sq m set to complete in the year as investors look to capitalise on cheap debt and deploy significant amounts of capital in the booming sector.

“With a lack of investable stock available on the market, it is expected that investors will continue the trend towards building speculative supply, on the back of expectations of further occupier demand.”

Retail trade accounted for 60 per cent of the take up of industrial space in 2021, in line with the surging trend to e-commerce in Australia, while industrial vacancy rates dipped from 2.4 per cent to 2 per cent in Brisbane over the year.

Prime net face rents have increased 2.8 per cent over the past 12 months.

But in the race to secure pre-leases prime incentives have increased alongside this. The average incentive at the end of December was 21 per cent, up 220 basis points over the year.

“In line with the elevated speculative supply pipeline in the Brisbane industrial market, many of the significant occupier transactions for the quarter were in pre-lease market,” J-Baleh said.

“The most significant pre-lease deals in the fourth quarter of 2021 include Winning Appliances at 3270 Ipswich Road, Wacol for 45,740sq m, and Bapcor Limited in Berrinba for 45,000sq m.

“It is expected that larger occupiers will continue to look at speculative developments for their future space requirements as tranches of speculative supply continue to be developed.”

“Land values are expected to continue to rise as land availability becomes scarce in Brisbane. Particularly in precincts where there is not a great amount of future land development available,” she said.

“However, this in turn will result in a lack of pure land transactions as developers will look to hold on to land offerings to capitalise on the future value rather than dispose of them.”

Australia’s industrial vacancy rates are at an all-time low of 1.3 per cent nationally, down from 6.3 per cent two years ago. 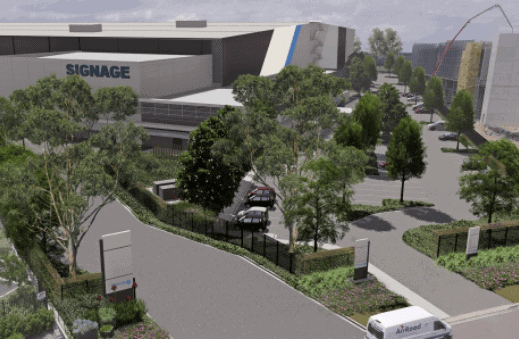 Charter Hall is moving ahead with plans to develop a 4.8ha site in west Sydney, lodging plans for the Compass Logistics Estate as the group grows its industrial holdings in the area.

There would also be a concrete vault for the storage of “controlled drugs”, chillers to reduce operating temperature and secondary packaging rooms for pharmaceutical products.

“The proposed warehouse will be used for general storage and distribution of pharmaceuticals, medical devices and health food products and other related products which will need to be maintained between 15 to 25 degrees Celsius,” the application said.

The ASX-listed company purchased the land as part of a larger 6ha site for $35 million in 2018 to maximise its land bank close to critical infrastructure. The purchase was made through a joint partnership between Charter Hall Prime Industrial Fund and Core Logistics Partnership.

In mid-2021 the fund also acquired the 90-year leasehold for 35ha of industrial land at Light Horse Business Club in the same region from the Western Sydney Parklands Trust. 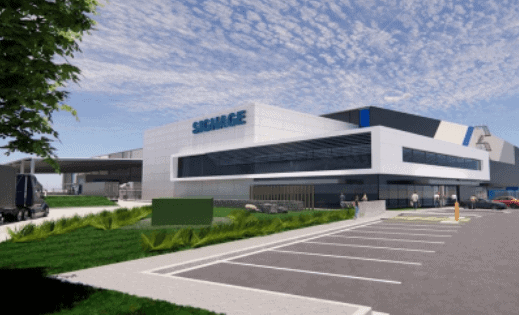 ▲ The state significant plans for Charter Hall were designed by Qanstruct with landscaping by Habit8 and are currently on exhibition.

The five-year development agreement would see Charter Hall develop the estate with a gross lettable area of 170,000sq m and an on-completion value in excess of $300 million.

“The shortage of zoned, ready to develop land, provides the opportunity to further expand our modern logistics portfolio.”

The industrial market in Eastern Creek is rapidly expanding with infrastructure investments in Sydney’s western growth corridor including WestConnex tunnel project and the Western Sydney Aerotropolis. 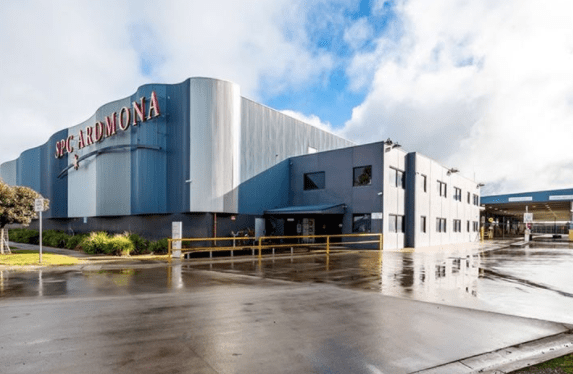 The initial yield on the transaction is about 6.1 per cent, setting a fresh benchmark for the local market where prime deals have been rare.

The processing plant is on a largely unused 23.4ha site at Andrew Fairly Avenue, providing Charter Hall with development potential.

It was purchased with a 30-year triple-net lease and will be held in Charter Hall’s $2.5 billion Direct Industrial Fund No.4 (DIF4).

“[This] acquisition is consistent with the fund’s investment strategy, presenting a rare 30-year triple net lease, introduces a new tenant customer to the fund’s portfolio and enhances DIF4’s exposure to the non-discretionary food industry.” 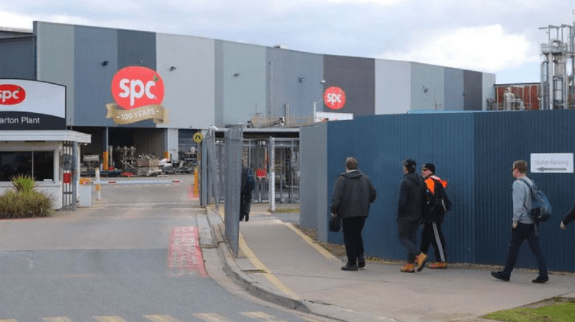 ▲ The sale of the facility by food processor SPC will help the company raise funds to develop new products and increase efforts to break into international markets.

Charter Hall noted the Shepparton acquisition would extend the fund’s weighted average lease expiry to 11.2 years at 100 per cent occupancy.

In recent months, DIF4 has deployed over $375 million in acquisitions, providing investors access to leading national tenants including Cleanaway, Tesla, Bunnings and the federal government.

“The standout [in 2021] has been the shift in mindset in the urgency of our tenant customers to adopt automation,” Simons said.

“Pre-Covid the general view was that automation was a good thing to acknowledge and possibly pursue.

“Post-Covid the mindset has changed to automation being something to consider as a priority noting the changing world and the benefits of scale, efficiency and flexibility automation can bring to their businesses.”

Simons said the renewed focus would require significant change to permitted land uses, a need to rethink strategies around zoning, permitted uses, hours of operation and concepts such as multi-level, high density warehousing.

“This will become critical to allow our cities to function effectively in the future,” he said.

The group’s managed portfolio of warehouse and logistics assets, worth $3.4 billion, booked a 9.6 per cent lift in values last year.

Charter Hall currently has a $2.3 billion industrial and logistics pipeline with a focus on Sydney and Melbourne. 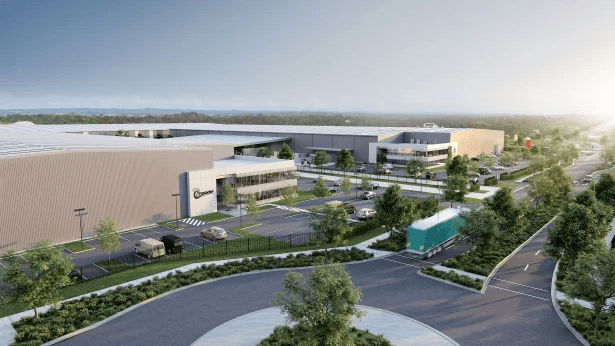 The completion of 1.3 million square metres of new logistics facilities in the first six months of this year will ease pressure on companies seeking warehouse space and ensure a more normalised rental market this year, JLL’s director of industrial and logistics research, Annabel McFarlane has predicted.

The real estate firm’s latest figures show prime industrial rents surged by double digits in most capital city markets in 2021 due to increasing levels of competition between tenants for a limited supply of available warehouse space. The acceleration of online retailing and supply chain disruptions, which fuelled a “just in case” rise in stockpiling and onshoring, were the two biggest drivers of demand.

According to JLL, the highest prime effective rental increases occurred in Perth (up 14.6 per cent), Melbourne (14 per cent) and Adelaide (13 per cent) over 2021.

In the secondary market, effective rents rose 16 per cent in Brisbane and Melbourne and 10 per cent in Sydney. Effective rents take into account incentives (such as rent-free periods) which JLL said were trending down.

“The supply response has been significant. Landlords are responding by construction stuff – JLL is tracking over 100 projects underway,” Ms McFarlane told The Australian Financial Review.

With almost two-thirds of this new supply already accounted for in leasing precommitments, the remaining speculative development should ensure the market “normalises”, Ms McFarlane said.

“It all depends on the volume of speculative development.” 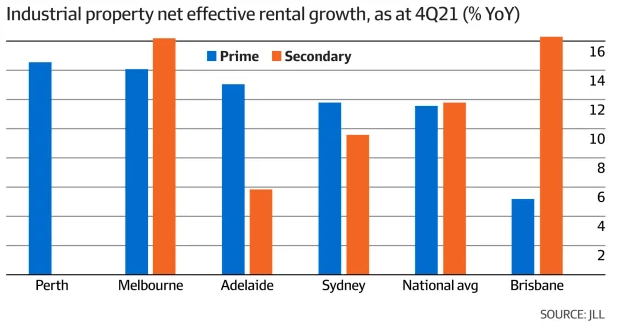 Despite an expected easing of rental growth, Ms McFarlane still expects “above average” growth in the major markets. Sydney has historically averaged 3.5 per cent annual rental growth and Melbourne a bit less than that, she said.

“We’re monitoring very spiky volumes of construction, but are not unduly concerned due to high precommitments. “We don’t expect a supply imbalance,” Ms McFarlane said.

Fourth quarter 2021 figures compiled by JLL show 877,200 square metres of space was leased over the last three months of 2021, the majority in Melbourne (39 per cent) and Sydney (33 per cent)

While the December quarter was the only quarter in 2021 in which the gross take-up of warehouse space was less than 1 million square metres, JLL’s Australian head of industrial and logistics Peter Blade said the decline reflected the “severe lack of available leasing opportunities in the market at present” rather than weaker demand.

“We have continued to see consistent levels of occupier inquiry across all of our national markets in the second half of 2021, but there is a real shortage of scalable and immediately available industrial space which has really constrained the flow of deals,” Mr Blade said.

The main contributing factor to the decline in available space was a lower-than-expected volume of new development completions.

Adding to the challenges of those seeking additional warehouse space, was the relatively minimal volume of speculatively developed stock.

In Melbourne, the volume of warehouse completion (facilities 5000 square metres or bigger) exceeded 800,000 square metres for the first time in a calendar year. However, incredibly strong occupier demand through 2021 absorbed 91 per cent of this stock, JLL found.

“Over the course of 2021, the immediacy of most occupiers’ requirements has forced most tenants to primarily focus on existing assets in their search for space,” Ms McFarlane said.

“However, in instances where this isn’t feasible there has also been opportunities sought in soon-to-complete developments, which minimised the amount of speculative space delivered to the market last year.”