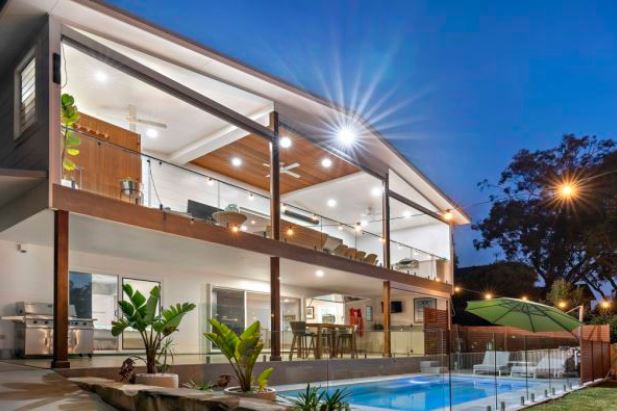 Affordability constraints are starting to bite for home-buying hopefuls, with the level of buyer demand easing compared to a few months ago, new research shows.

Although the latest lockdowns prompted some potential buyers to put their plans on hold, others had already been scaling back their property searches as prices spiralled out of reach.

Interest is still stronger at this point in late winter than it usually is at this time of year across most capital cities except Sydney and Hobart, and in regional Australia, as potential buyers who missed out in recent months continue their search.

But the white-hot competition seen in March, when crowds of bidders were paying huge sums at auction, has started to come back.

The Domain Buyer Demand Indicator (BDI) measures search behaviour on domain.com.au to identify active buyers who are more likely to purchase, such as those who shortlist a home or send an inquiry. It tracks changes in demand over time.

Demand peaked in March for Sydney, Melbourne and Brisbane, and in July for Canberra, the indicator found.

“Buyer demand across all cities has come off its peak,” Domain chief of research and economics Nicola Powell said.

“Demand is easing overall and that is going to be the impact of affordability, and the fact we have seen price rises across all of our capital cities.”

House prices have soared in the wake of interest rate cuts, government stimuli and a widespread shift to working from home that has prompted owners to upgrade into more spacious residences. Sydney house prices jumped 24 per cent in the year to June, on Domain data, with Melbourne up 16.2 per cent and all cities up by double digits.

“Affordability [is an issue] for all buyers, not just first-home buyers but all buyers, because we’ve seen such significant jumps over the year to date,” Dr Powell said.

The research also tracked the state of the late-winter market, comparing buyer demand over a 30-day period to August 15, to average demand at this time of year.

Melbourne buyer demand is now 10 per cent higher than average at this time of year amid pent-up demand from those who have not yet been able to find their dream home, with Canberra a stunning 60 per cent higher, Brisbane up 7 per cent and Perth up 30 per cent, while regional Australia is 26 per cent higher.

Sydney is 4 per cent lower as the city goes through an extended lockdown, with the real estate industry still open for private inspections. 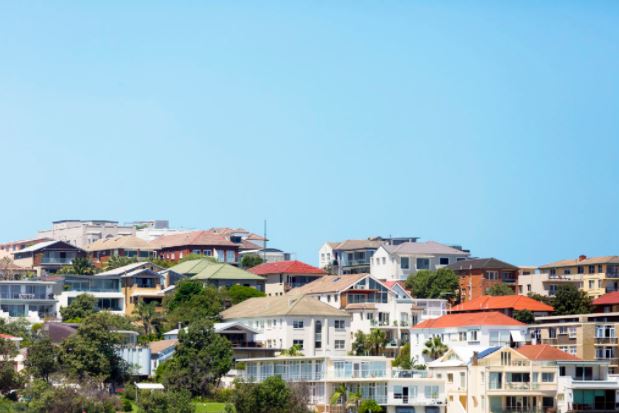 The lockdowns also cause some buyers to pause their plans until they can get more clarity about when restrictions will lift, Dr Powell said.

Online auctions were still offering good outcomes for those keen to press ahead, allowing buyers to secure a home when there was less competition or sellers to ink a deal quickly, she added.

Once cities reopen, Dr Powell said, we could expect a rebound in activity due to pent-up demand and supply, but she doubted the price jump would be a strong as it was earlier this year given affordability had already become a hurdle.

The affordability challenge is clear in some of the most sought-after neighbourhoods.

Buyer demand in Sydney’s eastern suburbs and northern beaches is down 14 per cent compared to the average for this time of year, as buyers reckon with eye-watering price growth that has sent prices in those pockets up 26.4 per cent and 38.7 per cent in a year, respectively.

“We’ve seen some extraordinary rates of growth in our premium areas,” Dr Powell said. “That becomes a hurdle – it’s a financial impact.”

The more affordable Central Coast, by contrast, recorded a 22 per cent jump in buyer demand as remote workers cast their eyes further afield.

In Melbourne, where prices have not boomed as much in the current cycle as Sydney, prestige neighbourhoods are still in hot demand.

As for Canberra, where overall demand is up 60 per cent compared to the average for this time of year, Dr Powell highlighted the resilient jobs market, high average wage, more affordable housing than Sydney, and little impact from the pandemic until the current lockdown.

She warned the lockdowns in the ACT and Victoria could start to impact buyer demand, as is happening in Sydney. 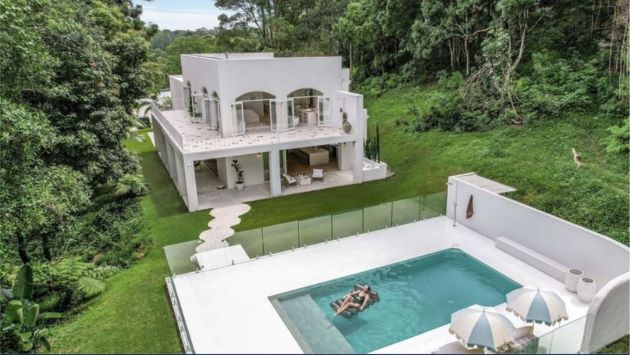 One of the most beautiful homes in Australia is now $500,000 cheaper.

Casa Campana, in Nunderi, between the Gold Coast and Byron Bay in New South Wales, has an asking price of $3.5 million.

Agents have revised the figure on the listing from $4 million, which was quoted when it came onto the market, according to Domain.

The Mediterranean-style rainforest retreat, owned by creative agency founder Sophie Bell and her husband Michael, has been one of Australia’s most highly-sought homes for photoshoots.

Australian and international businesses and magazines have staged shoots at the eye-popping estate, which is on the books of LS Properties’ Brent Savage and Ethan Price.

The home has a bohemian flourish and crisp undertones, and was a collaboration between Sophie Bell’s Peppa Hart studio and Three Birds Renovations.

Highlights include steps from the house to a perfectly-paved pool pavilion, and the main bedroom’s luxe open-plan bathroom, which faces a sweeping terrace, surrounded by Tweed Coast hinterland.

Cabarita Beach is an easy drive away, if there was ever any desire to leave the pool… 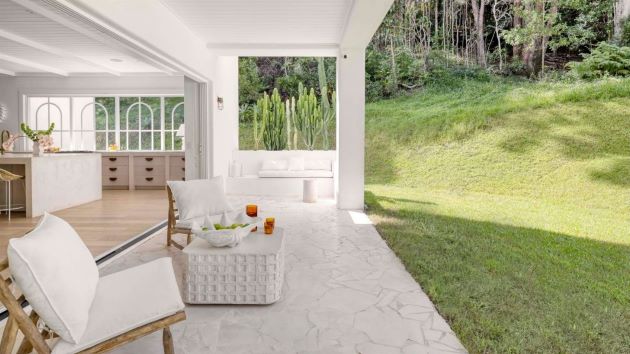 The kitchen and dining area connects to greenery. Photo: Domain 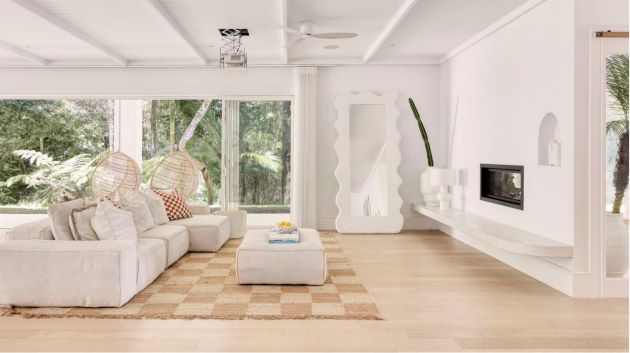 A glamour living area with the Tweed Coast hinterland beyond. Photo: Domain

The bedroom and en suite are configured as one breezy, open-place retreat. Photo: Domain 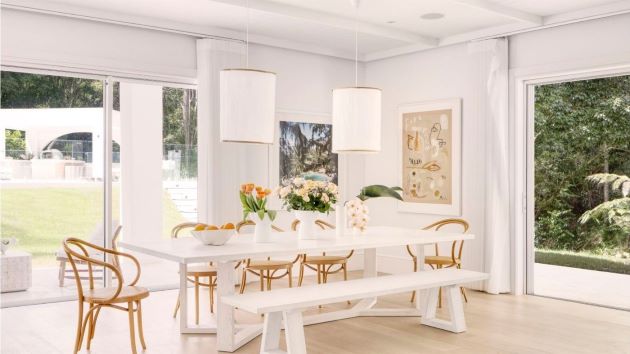 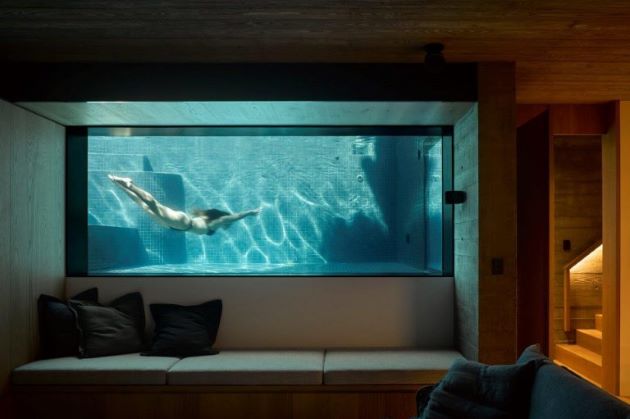 A multimillion-dollar Noosa Heads home draped in lush plants and with a sparkling pool submerged in the middle has been named Australia’s best.

The architecturally designed concrete and timber property brings the “jungle” to riverside living, with masses of greenery tumbling over the building’s angular lines.

Among the most unique features of the five-bedroom, four-bathroom home (which also has two powder rooms) are the window-framed pool in the courtyard and luxurious glass-encased wine cellar.

The property on Witta Circle, in the Noosa River, was named Australian Home of the Year at the 2022 HIA-CSR National Housing Awards. It also won the national Custom Built Home title.

It’s beauty has been captured by architectural photographer Christopher Frederick Jones of cfjphoto.com.au. 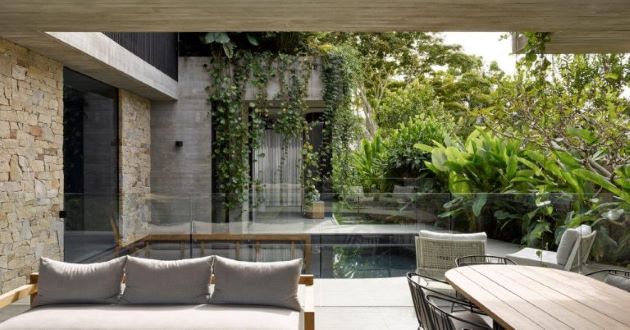 Overlooking the pool which is framed by leafy gardens.

The skilful design and construction, which connects the natural and built environments, undoubtedly caught the judging panel’s attention.

Built by Sunshine Coast-based company JW Constructions, the holiday home was designed by Brisbane firm Lockyer Architects. The landscaping was completed by the Conlon Group.

The home boasts an understated street frontage, but upon walking inside visitors are swept away to an exotic location.

Located overseas during the height of the COVID-19 pandemic, the home owner was unable to oversee construction.

Scroll down for more amazing images

“For them to put faith and their vision in our hands is rewarding,” Mr Warren told Sunshine Coast News.

“It was about conveying the architect brief and the client’s brief and bringing that to fruition. The landscaping played a big role in bringing the whole project together.

“It’s hard work when you’re doing it as you are focused on the process and getting everything right.

“It’s fantastic when you finally hand over to the client… and you sit back and look.

“I feel privileged to be able to work on such an amazing design and be a part of bringing a person’s dream to life, people who have worked their whole lives to build their dream home.”

The home centres on biophilic design principles bridging the gap between the indoor and outdoor environments.

Outside, the natural greenery that drapes from the upper-level gardens softens the angular lines of the home.

At its heart, the central courtyard and swimming pool evoke a sense of tranquility.

This theme continues inside. The main bedroom has a lush private garden and privacy screens cantilevered over the courtyard.

Technology has not been overlooked. The home has been fitted with a cutting-edge  automation system and a self-sustained battery generator. 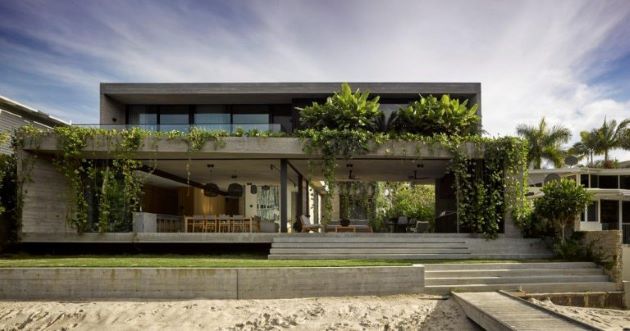 Witta Circle, located on the Noosa River, has its own sandy river bank. 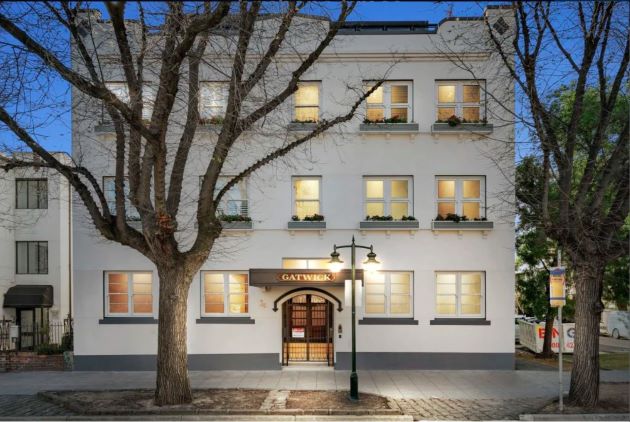 The Block penthouse in St Kilda’s iconic Gatwick building that was transformed by fan favourites Norm and Jess has hit the market for the first time since completion in 2018.

Renovated by the Sunshine Coast couple, the three-bedroom penthouse turned heads for its luxurious kitchen, soaring ceilings and floating fireplace.

Of course, being a penthouse on a prime corner position, the pad captures panoramic views of CBD skyscrapers, even from the barbecue zone.

The pair received a 30/30 score from the judges for their spacious outdoor terrace, with the rooftop sanctuary also featuring a louvred roof, decking, paved seating area and serene water feature.

Norm and Jess included high-end details throughout the residence, including a concrete bathtub, a marble hearth under that suspended fireplace, herringbone oak floors, Alexa voice-controlled technology (which can even be used to turn on the shower) and a state-of-the-art security system. 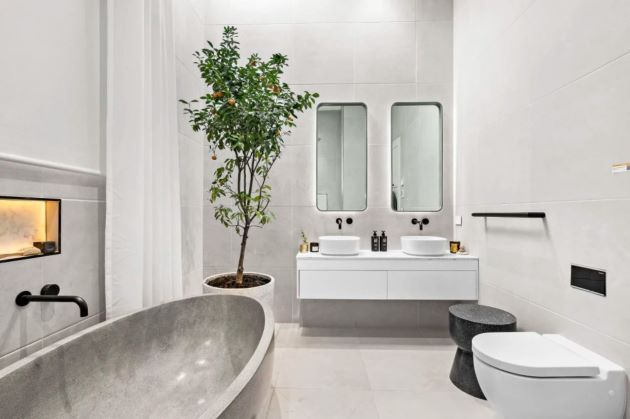 The concrete bath is still in the apartment, which has come up for sale.CREDIT:BELLE PROPERTY BRIGHTON 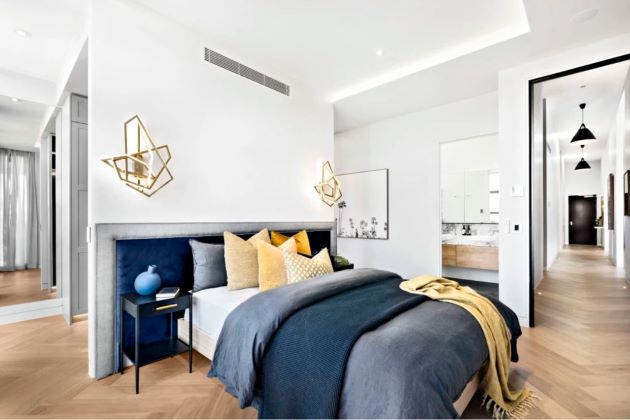 The main bedroom in the Gatwick penthouse apartment built by Norm and Jess.CREDIT:BELLE PROPERTY BRIGHTON 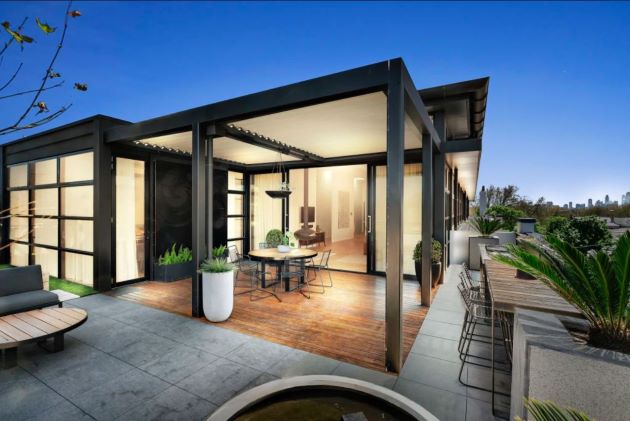 The main bedroom suite has its own balcony plus an en suite with double shower and a walk-in wardrobe. The three-oven Neff and Bosch kitchen with soft olive-toned cabinetry hides a butler’s pantry.

The penthouse was previously listed for rent during the pandemic, with a discounted price of $2200 per week, down from $2700.

Despite the penthouse being beloved by fans of the juggernaut renovating show, the Queensland couple came last on auction day, with the smallest profit margin.

They made $209,000, partly due to a high reserve price. Expressions of interest for the penthouse close May 16 at 5pm.