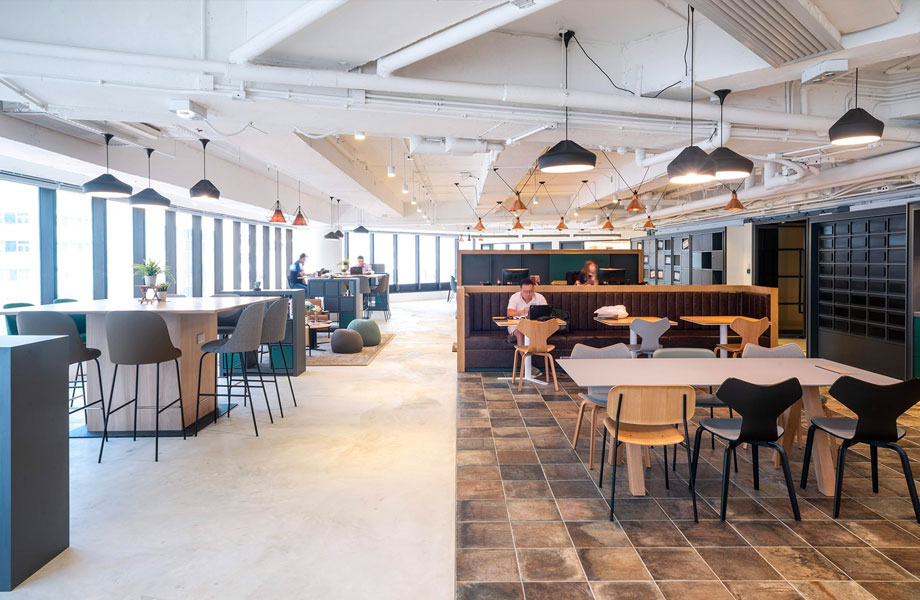 Global serviced office giant IWG has shrugged off concerns about the potential impact of coronavirus on the commercial property sector, announcing plans for 10 new locations across Australia.

The global player, which has plans to grow its network from 3,500 centres to at least 20,000 worldwide, currently has 77 co-working locations in Australia spanning 80,000 square metres.

The new centres will sit within IWG’s Regus brand, which falls under the umbrella of the global London-listed company and will be delivered in partnership with the Adams Group, which own Queensland-based convenience store and service station operator NightOwl.

“The appetite for flexible and co-working spaces was booming in Australia pre-Covid and the pandemic has only increased demand,” Adams Group chief executive Adam Adams said.

“There is a clear gap in the market for a high-quality product in Queensland and our goal is to partner with Regus, the global leader, with a strong brand, professional infrastructure and worldwide network to fulfil this need.”

IWG head of partnership growth Mark Bhardwaj said the company’s ongoing franchise concept offered partners the opportunity to make high-yield investments while allowing IWG to expand without the use of its own capital.

Despite the losses, and foot traffic across the company’s Australian portfolio falling by a third of pre-Covid-19 levels, IWG plans to push ahead with a recently-acquired £320m (A$568m) capital raise to fund its expansion drive.

With 7 million square metres across 18 major cities, flexible office space now equates to 4 per cent of total Asia-Pacific office stock, according to analysis by CBRE.

ASX-listed serviced office provider Servcorp, which has a global footprint that encompasses 145 locations in 52 cities, reported a 4.6 per cent lift in revenue to $352.9 million across the fiscal year even as its net capacity decreased.

And despite ongoing uncertainty about the company’s future, US giant WeWork recently opened its 21st location in Australia, and local start-up Workit Spaces expanded to a third site, both targeting enterprise customers.

WeWork moved into a heritage-listed corner building at 66 King St in the Sydney CBD following a $72 million restoration and upgrade.

Workit Spaces also recently secured 9,000sq m on a 15-year lease at Goodman Group’s Alexandria Industrial Estate at 39 Bourke Road, Sydney with the ability to house up to 350 small to large e-commerce businesses.

This article is republished from https://theurbandeveloper.com/ under a Creative Commons license. Read the original article.
Related Topics: 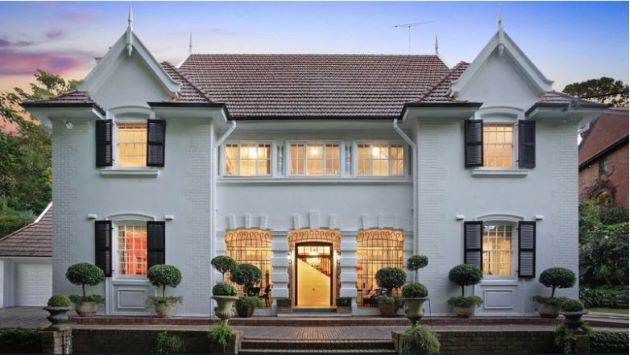 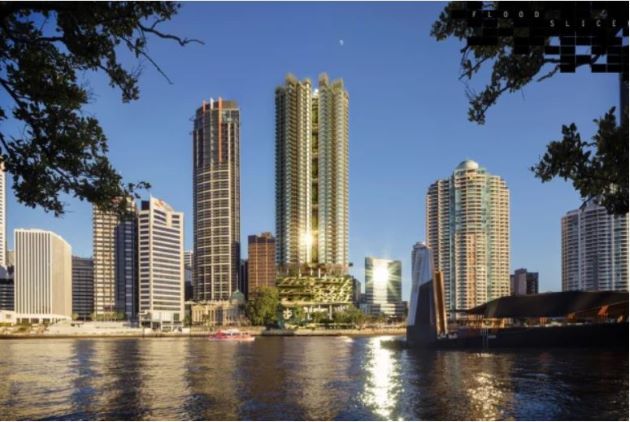 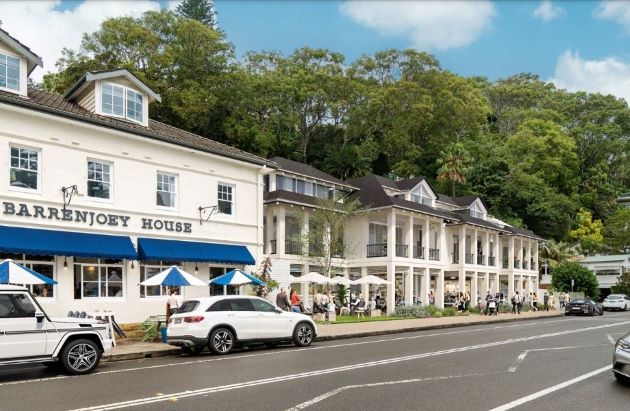 The flames on the fryers at the Palm Beach Fish & Chips Shop, a roadside institution on Sydney’s northern beaches, flickered off months ago.

But tech rich-lister Robin Khuda is still feeling the heat.

The demolition crew has come and gone, levelling the site where locals along with movie stars, rock stars and sporting heroes had once placed their salt-sprinkled orders.

A development battle line—with a pristine view over Pittwater—has been drawn.

On one side is the wealthy founder of data centre operator AirTrunk who wants to build a shop-top residential development adjoining the landmark heritage-listed Barrenjoey House.

On the other side is a local community—much of it also cashed-up—fighting to protect the peninsula’s village vibe.

Khuda, who has been on a $120-million-plus property acquisition spree over the past couple of years, purchased the 1140sq m Barrenjoey Road site through his investment entity Asia Digital Investments for $6 million.

Since then, he has been seeking to amend the site’s existing development approval granted in 2014 for four apartments and three retail tenancies.

Last year, an application for modification of the development consent was lodged with the Northern Beaches Council for a three-level design with six apartments above retail.

But following community backlash and council feedback deeming it “unacceptable and inconsistent with the seaside village character” of the area it was withdrawn.

▲ The former Palm Beach Fish & Chips Shop on Barrenjoey Road, which has been demolished to make way for the controversial shop-top residential development.

Design firm Rob Mills Architecture went back to the drawing board to address the concerns regarding the proposal’s architectural style, appearance and relationship to the adjoining heritage listed Barrenjoey House.

Subsequently, a new application for an alternative shop-top concept—to be constructed at an estimated cost of about $13.6 million—was recently filed.

It comprises a three-storey building with pitched rather than flat roof forms that according to the documents is “both sympathetic to its context and contemporary in its use of materials and forms in response to local climate and the seaside village character”.

The new scheme includes a publicly-accessible plaza and “deep and generously proportioned” colonnade providing weather-protected outdoor seating adjacent to the commercial tenancies on the ground level. 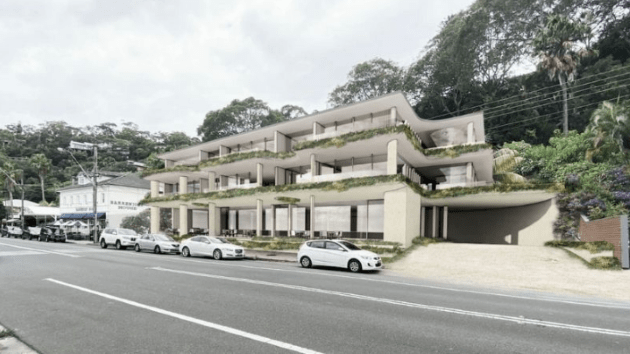 ▲ Artist’s impression of the previous development proposal for the Barrenjoey Road site which was deemed “unacceptable and inconsistent with the seaside village character” of the area.

The new application concedes the upper-level roof eaves exceed the site’s 8.5m height blanket by as much as 2.99m in some parts and a height variation request has been submitted.

“We consider that such request is well-founded in that it facilitates the development of the site in a manner which provides far superior urban design, heritage conservation, residential amenity and landscape outcomes compared to the development approved,” the planning report said.

A submitted heritage impact statement noted the proposed new building was “similar in height and scale to Barrenjoey House” and although contemporary in character it “demonstrates respect for the key forms, architectural proportions and materiality” of its 99-year-old neighbour.

Numerous submissions objecting to the new scheme already have been lodged by the local community.

They describe the proposal as a monstrosity, imposing, grossly out of character and, according to the owner of a property behind the site, even higher than the previous proposal.

“It is a bulky building that not only flaunts height restrictions but is of an ugly, pretentious post-modern design; a complete anachronism,” one of the objections said. “With heavy neo-classical porticos and and a pitched federation roofline it is not at all sympathetic to the site and the lifestyle of the area.”

But one of the submissions begged to differ describing it as “a beautiful asset to the already beautiful Palm Beach area”.

“We can’t keep living in the past and not let these beautifully designed buildings be built,” it added.

Khuda—who has amassed a $600 million fortune as a data centre entrepreneur—in recent times has been satisfying a newfound penchant for high-end property investment and development.

His property splurge has included a total of three holdings in Palm Beach for $25 million as well as a coastal retreat in Lennox Head for $7 million, an apartment in Crown Resorts’ Barangaroo tower for $10.7 million and a Mosman mansion for close to $20 million.

The AirTrunk chief executive has also acquired two old apartment blocks at Manly’s North Steyne for $18.2 million, which are earmarked for another luxury apartment development.