THE Coast’s popularity as a lifestyle destination is strengthening its housing market, according to real estate executive Rem Rafter.

“New developments have had good pre-sales, including Stockland’s Oceanside Kawana and several apartment projects by the Walter Iezzi Property Group.

“Brisbane-based Mosaic Property Group has also been active on the Coast, with off-the-plan apartment projects under way at Coolum and Kings Beach, Caloundra.

“We have seen from recent site sales that developers are concentrating their efforts in these areas and investment yields have become quite tight as a result.”

He said the Coast’s apartment and housing market could flourish for another two to three years.

“A recent presentation by Tim Lawless of CoreLogic shows positive indicators including improved interstate migration and steady capital gains across the coast of 5.5%.

“The Sunshine Coast’s median house price of $579,526 is attractive to southern buyers, with Sydney’s house price now over $1 million and Melbourne not far behind.”

‘Listing of the year’: why this beachfront apartment complex is set to smash record 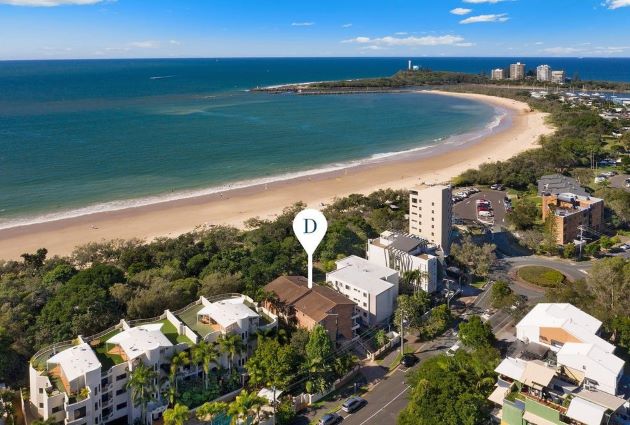 Prospective buyers from as far as Brazil, Britain and the US are eyeing an “incredibly unusual” beachfront opportunity on the Sunshine Coast.

Touted as the “listing of the year”, 58 Parkyn Parade offers the rarest of opportunities that could set yet another record for a region firmly in the property spotlight.

It’s an entire block of apartments under single ownership on the highly sought-after Mooloolaba Spit.

The brown brick complex on the beachside of Parkyn Parade is being sold in its entirety, with the 620sqm north-facing block and all three self-contained units.

The property will go under the hammer this weekend.

It last changed hands in 1984 for $60,000 when it was just a beach shack, and the new owners built the apartments a couple of years later.

Currently used as a holiday home for extended family, the complex could be renovated for investment, redeveloped into a beachside mansion, or become strata-titled apartments.

All three apartments in the 1986-built building boast large bedrooms, ensuites and open-plan living and dining.

Sliding doors open to balconies, which offer views of the pool, courtyard and beach reserve.

Grant Whisker, from Define Property Agents, said the nine-bed, six-bath property was an “incredibly unusual” market offering and was expected to break sales records within Mooloolaba and possibly even the Coast.

Mr Whisker said the listing was attracting global interest and he had fielded calls from Brazil, Britain and the United States.

He said three-bedroom, two bathroom strata-titled apartments in the area were selling for between $2 million and $3.5 million.

“This is a very iconic piece of real estate, and I’m coming from a place where I have sold 25 apartments on the Spit in the past five years,” said Mr Whisker.

“To get a whole building is such a rarity and this is the only time a building like this has been sold on the Spit.”

“If you took the building away, what you’ve got is a 620sqm allotment on the edge of one of the best beach accesses in the country.

“We’ve had extensive international enquiries. Interstate enquiry, and the enquiry locally has been very strong, which shows a strong appreciation and true appreciation from local investors and developers.”

The current owners, a Brisbane-based family, purchased the Mooloolaba parcel of land on a whim in the 80s.

“They built the building… after having been coerced to the auction. It was 1984 and the agent who was focused on selling the old beach shack that stood there previously was a friend of my sellers,” Mr Whisker said.

“He said ‘Can you come to the Coast on Saturday? I’ve got an auction on and no registered bidders’.

“My client bought that old beach shack and then had to ring his wife and tell her.” 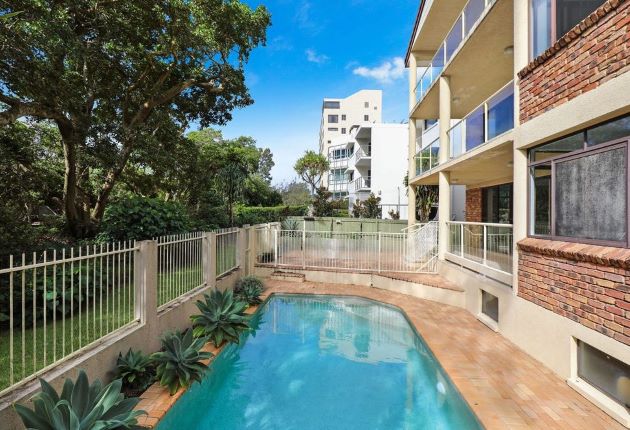 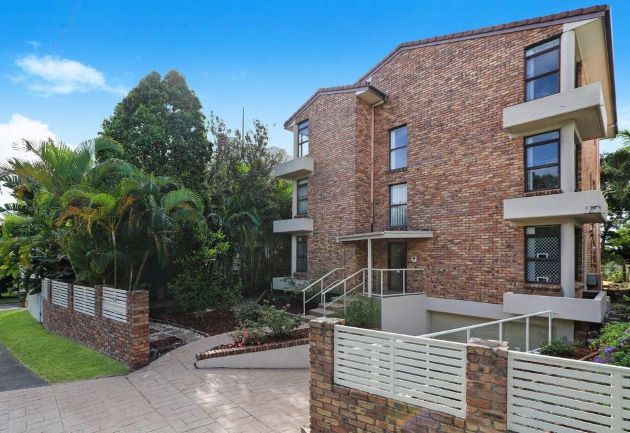 How 5 prime markets are performing mid-2022 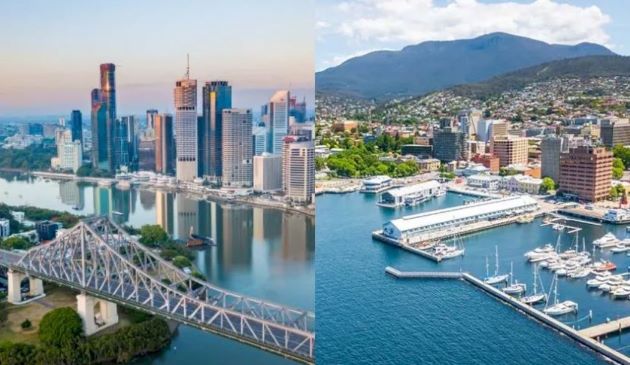 As the half-year mark for 2022 approaches, looking at how things have changed since the start of the year can provide some valuable insight into expectations leading into 2023.

PRD’s has issued its Affordability and Livability Property Guides for the first half of 2022, looking at the performance of property in the hotspots of Brisbane, Sydney, Melbourne, Hobart and the Gold Coast.

What the reports show is that the major markets of Sydney and Melbourne no longer bear the dubious titles of roughest and toughest.

“The country’s two largest cities are becoming opportune markets for buyers and in particular first home buyers,” according to PRD.

Median property price growth has been shown to be slower in Sydney during this period than over the previous six months and swung into decline in Melbourne.

But Melbourne has enormous potential to change, given that office life is returning and the city is starting to see its labour force recover following the protracted lockdowns of the past two years.

Both cities, however, report a “lower average vendor premium compared to the past 12 months and a growing most affordable price bracket (relevant to each capital city) that is available to buyers,” the group noted.

Brisbane has proven to be the usurper of Sydney and Melbourne in regards to median property price growth, recording a continuously higher level of growth since the start of the year compared to the network’s previous report on the Queensland capital.

“An undersupply is evident in Brisbane Metro, particularly for houses. The Olympics 2032 announcement brought a certain buzz into Brisbane’s property market, and with border openings this trend is expected to continue,” PRD noted.

Meanwhile, Hobart has eclipsed Sydney, Brisbane, and Melbourne for the title of hottest seller’s market. Hobart buyers now need to offer the highest average vendor premium when compared to other capital cities to secure their dream property, whether that’s a house or a unit.

PRD remarked that this has been a consistent pattern for Hobart over the past 12 months, bucking the national trend that has seen a declining pattern in average vendor premium, or a swing towards average vendor discount, in other capitals.

And on the Gold Coast it’s a tale of two markets, with the houses showing slowed growth compared to the previous period, while units race ahead. Affordability appears to be a growing issue in the beachside hotspot, with the premium market getting most of the turnaround, while lower-cost houses have shrunk by half in six months alone.

Federal election results revealed: What it means for investors 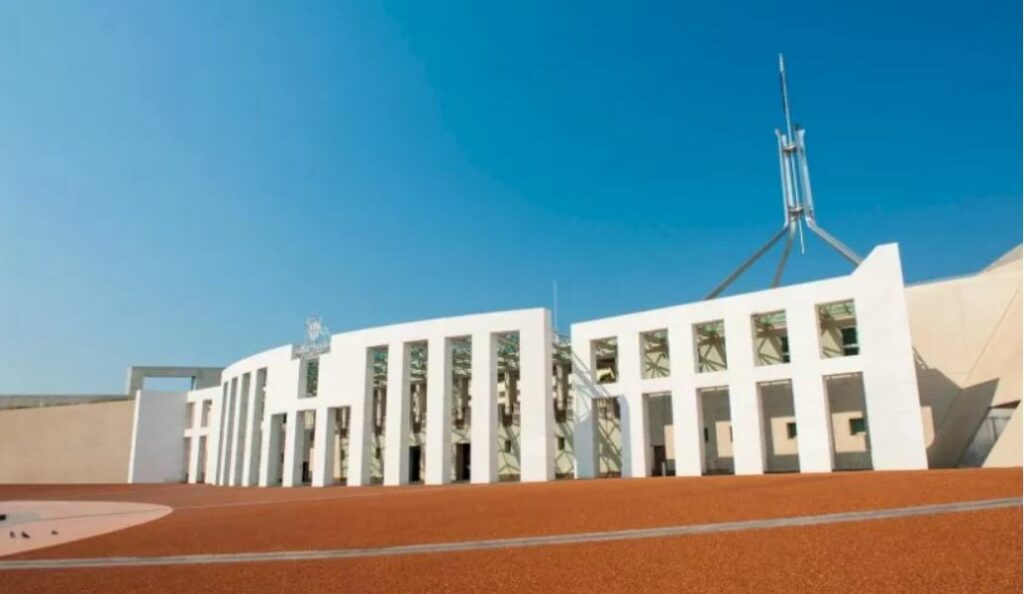 Australia has voted. Looking forward, here are the policies property purchasers, home owners, and investors can expect from the next government.

The results of the 2022 federal election are in, with Scott Morrison conceding the vote on Saturday night (21 May) and the Anthony Albanese-led Labor party declaring victory shortly after.

Mr Albanese will be Australia’s next Prime Minister, even though it’s yet uncertain whether he’ll be governing a minority or majority government.

In his victory speech, the man who will be Australia’s 31st Prime Minister said he wanted to “bring Australians together”.

Addressing the economy, he said that “together we can work in common interests with business and unions to drive productivity, lift wages and profits”.

“I want an economy that works for people, not the other way around,” he stated.

With housing affordability for both renters and buyers one of the hot button issues of the election, Mr Albanese made a number of promises along the campaign trail that will impact the property market when put into practice.

While a large crossbench could play a role in determining the extent to which the government is able to employ its election initiatives, here are the policies a Labor government has promised to enact:

Anthony Albanese pledged that a Labor government would cut the cost of a mortgage by up to $380,000 for some eligible Australians under its Help to Buy scheme.

Buyers will be able to purchase a property that they intend to live in with a deposit of as little as 2 per cent. Participating lenders finance the remainder of the purchase.

During the period of the loan, the home buyer is able to buy an additional stake in the property when they have the means to do so. Before that point, they will not have to pay rent for the portion of the home owned by the government. The government would recover its equity and its share of the capital gain when the house is sold.

Following calls from housing advocates across the country, Mr Albanese pledged to establish a National Housing Supply and Affordability Council to address the two interrelated issues.

The council will reportedly be composed of experts from the finance, economics, urban development, residential construction, urban planning and social housing sectors.

Under an expansion of the First Home Guarantee, the Labor party has promised to help 10,000 regional Australian families a year buy their first home.

The scheme aims to triple the number of places that Australians living in regional areas received last year under the current FHG scheme.

Places will be reserved for Australians who have lived in the region in which they apply from for more than 12 months. It will see approved applicants purchase a home with as little as a 5 per cent deposit, without needing to pay lenders’ mortgage insurance (LMI).

Continuing on from the Labor party’s planned expansion of the First Home Guarantee, the party also promised to conduct six-monthly reviews of the scheme’s price caps in both the capitals and regional areas that determine the maximum price an eligible applicant can pay for their new home.

Labor backed down from its earlier proposed changes to negative gearing in July 2021, promising to “maintain existing regimes for negative gearing and capital gains tax” during the party’s tenure in power following the 2022 election.