Southeast Queensland needs a dozen mega-developments like Springfield if it is to cope with the extra 2.2 million people over the next three decades, a respected urban geographer has told Fairfax Media. 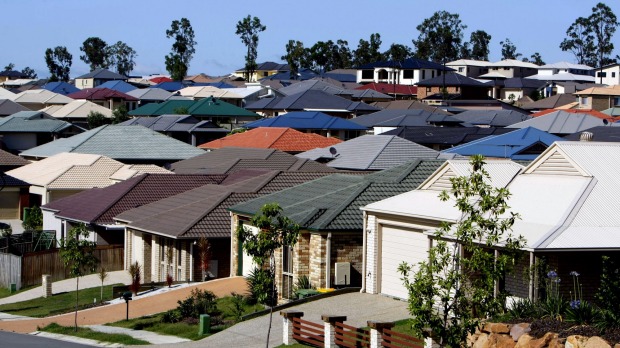 Professor Bob Stimson, Emeritus Professor in Geographical Sciences and Planning at the University of Queensland, told Fairfax Media there would be 5.5 million living between Noosa and Tweed Heads within three decades.

Professor Stimson – an analytical human geographer and regional scientist for 49 years – said Southeast Queensland could no longer rely on increasing densification with the existing area. 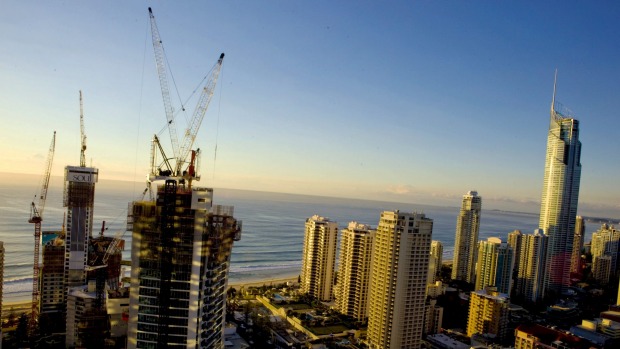 Population growth will require up to a dozen mega-planned communities to cope with an extra 2.2 million people.Photo: Glenn Hunt

Professor Stimson said between “10 and 12” large master-planned communities like Springfield or North Lakes – on Brisbane’s northern-edge – would be needed for the extra 2.2 million people.

“There is no way that all of the growth that is going to occur can be accommodated through urban infill,” Professor Stimson said.

“You are still going to need greenfield growth, fringe growth,” he said.

“So the big issue for Southeast Queensland over the coming decades is that you are probably going to need 10 or 12 of those types of developments to be occurring.”

Greater Springfield is a privately-owned 2680 hectare master-planned community south of Ipswich that has around 20,000 residents in two suburbs; Springfield and Springfield Lakes.

Professor Stimson said “green belts” between the Gold Coast, Brisbane and the Sunshine Coast were under pressure, but he believed would be protected because of the state government’s Southeast Queensland Regional Plan.

He said there was land near Beaudesert and Ipswich and between Brisbane and the Gold Coast for residential development.

“There is plenty of land that is not prime agricultural land, that is not ecologically important land, national park or high conservation-value land that could be taken up for that sort of growth.”

On Friday Australand launched a $400 million master-planned community for 25,000 people over 25 years called The Rise at Park Ridge in the Logan City Council area.

“With housing affordability throughout Brisbane and South East Queensland out of reach for many Australians, The Rise is keeping the dream of home ownership alive,” Mr Leggatt said.

He said jobs growth remained concentrated in the Sunshine Coast to Brisbane to Gold Coast line.

“Over the years I have been quite a critic of the Southeast Queensland planning process, which has tried to force growth into that western corridor because all the economic data demonstrates all the jobs growth is along the linear corridor that stretch to the north and south of Brisbane.”

Ipswich’s labour market statistics show unemployment beginning to fall from 9 per cent to 7.4 per cent, with 2600 jobs created since March.

“We have a massive amount of industrial, commercial and retail development including the largest concentration of transport and logistics companies in Australia with DB Schenker, Northline and TNT at Redbank,” he said.

Cr Pisasale said jobs were being created at the new HOLCIM project underway at Swanbank, the new GE Electrical building at Springfield Central and with the Orion Shopping Centre doubling in size.

“RAAF Base Amberley is also continuing to expand with a workforce of more than 5000,” he said.

“Ipswich and the western corridor has a major role to play in satisfying growth in Southeast Queensland.

“We can’t continue to simply concentrate growth within Brisbane and the coastal fringe if we think we will maintain the same quality of life.”

In May 2010 former premier Anna Bligh announced plans for three mega-cities in Southeast Queensland to provide homes for 250,000 people.

Those three cities – at Ripley (near Ipswich), Yarrabilba (south of Logan) and Bromelton – about six kilometres south of Beaudesert – are all underway 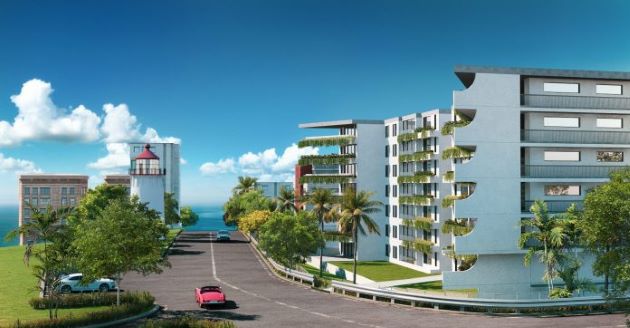 A developer wants to push luxury to new heights on Caloundra’s hilltop with an “iconic” apartment complex where you can play ‘golf’ in the penthouses.

Karam Boutique Residential has lodged an application with Sunshine Coast Council for its Lighthouse By Karam project of 26 ultra-deluxe apartments.

Taking luxury to the next level, every home would have its own plunge pool, infrared dry sauna and jacuzzi and each apartment would have three or four carparks.

The two penthouses, which would be priced over $6.5 million, would include golf simulators so residents could “play golf in your own living room”.

The eight-storey building would be perched opposite the historic lighthouses on Caloundra’s hilltop on Canberra Terrace, with views to the ocean and Glass House Mountains.

However, founder Neade Karam is also hoping to push up the project’s height limit by “asking for a couple more levels” on the sloped block which is zoned medium density.

Medium-density on the Coast generally refers to between two and six storeys but the developer is seeking eight and Mr Karam said they would work closely with council for the best outcome.

Mr Karam said he wanted to redefine high-end living on the Coast by offering palatial apartments of 600sqm, bigger than the average block size in Australia of 474sqm.

While the site, which stretches across 2 and 6 Canberra Terrace, could fit 60 to 80 apartments, Mr Karam said this project would have just 26 so they could be huge and extravagant.

Mr Karam told Sunshine Coast News the apartments would be larger and “more boutique” than those at the upcoming $250 million Paloma Paloma down the road which itself promises to “change Caloundra”.

But just because potential buyers have lots of money, it doesn’t mean they are assured of securing a property in Lighthouse by Karam.

Mr Karam said future home owners would be strictly vetted and hand-picked and would be required to live in the area as locals.

“It will be targeted and invitation-only and we will interview the buyers,” he said.

“It’s going to be extremely hard to buy because we’ll be vetting everybody personally. We’ll have lunch and get to know you.

“We’re not going to be arrogant but selective. We want to make sure that whoever buys blends in with Kings Beach.”

A development application was recently lodged with the council seeking a material change of use for multiple dwellings.

The 3,284sqm of land is zoned medium density but its neighbours are zoned high density.

Mr Karam said the project’s grand vision was born when a prized block of land on the corner of Canberra Terrace and Arthur Street came up for sale this year.

Until then, the developer was poised to start constructing a more modest project of four high-end terrace homes on three levels at 6 Canberra Terrace.

The opportunity arose to buy the land next door, on which sat an original red brick unit complex, providing a 114m frontage to Canberra Terrace.

“Once we got hold of a site that large in that position, we stepped right back and now we’re reworking the site to really do something special there,” he said.

“We want to make sure we blend in with the environment and make it unique.

“Like those old Italian castles that the older they get the more visually appealing they become.”

Mr Karam said final designs were still being worked on but the building would reflect the characteristics of the 1896 and 1968 lighthouses from which it derives its name.

Mr Karam said he had an affinity with Kings Beach having visited “every fortnight or weekend” during his childhood and was passionate about being true to the area.

“I’m 49 and I can remember we started going there when I was seven. It’s been a long time,” he said. 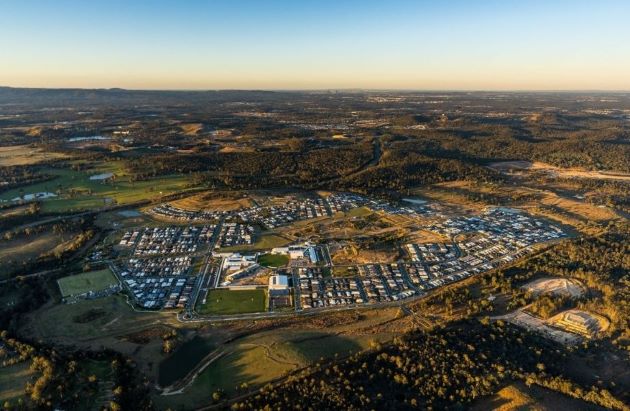 Stockland has swooped on a 77ha site in Brisbane’s western corridor as it wastes no time expanding its residential footprint in a strategic investment shift to realign its portfolio as a leading asset creator.

The property giant is planning to deliver about 1100 homes as well as a primary school and community facilities on the site at 944-1024 Ripley Road, South Ripley, which it has secured for an undisclosed sum.

Its latest acquisition is among a string of recent deals it has sealed to boost its pipeline of residential communities as part of a strategy review under chief executive Tarun Gupta.

Last year, Stockland revealed plans to sell about $2 billion of retail and retirement living assets as it cuts exposure to those sectors, refocusing investment in residential and expanding its workplace and logistics portfolios over the next five years.

The South Ripley site is zoned for residential use and is close to Stockland’s Providence masterplanned community in the Ripley Valley Priority Development Area, near Ipswich.

“We are excited about increasing our residential footprint with zoned land and the opportunity to build on the success of our Providence community, which has a very strong brand in the south-east Queensland corridor,” Stockland communities chief executive Andrew Whitson said.

“The acquisition follows more recent consolidations at Providence and aligns with our strategy to restock our masterplanned community pipeline with market-ready projects on capital-efficient terms, in well-connected corridors close to transport, schools, jobs and infrastructure.

“South-east Queensland remains significantly under supplied and we expect the new community will be highly sought after by homebuyers.”

Stockland Queensland communities general manager David Laner said the developer had almost $3.6 billion invested in Queensland, from Townsville to the Gold Coast—including Aura on the Sunshine Coast, the largest masterplanned community being developed in Australia.

He said a diverse range of housing was proposed for the elevated South Ripley site.

Subject to approvals, Stockland is planning to start the project after site settlement in 2024.

Its acquisition follows Stockland’s recent purchases in Victoria, including a 26ha site east of Geelong it has earmarked for about 325 land-lease homes and a further 100 residential homes for the site at 32-70 McDermott Road, Curlewis.

The developer also recently unveiled plans for a $201-million community in Tarneit.

Stockland Wattle Park will comprise more than 500 lots across the 84ha site 33km west of Melbourne. Stockland paid $82 million for the Sewells Road site in mid-2021. 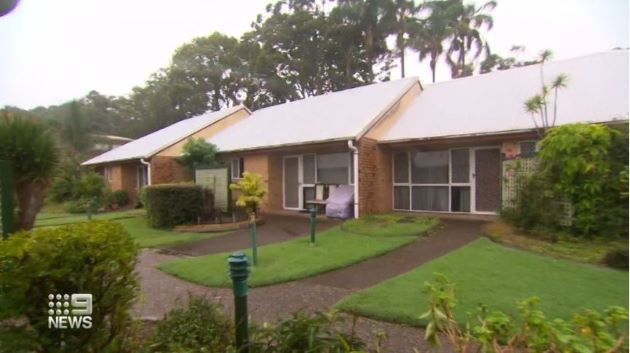 The Queensland will buy a council property sitting idle amid a rental and social housing crisis, to create more housing for vulnerable residents.

The Rochedale South property in Logan, owned by Logan City Council, was originally intended to create affordable rentals for pensioners but has been mostly empty for the past year.

Resident George Wright said he’s been at the property for 15 years, agreeing the empty units were “absolutely” a waste.

The rental availability in Logan is currently just 0.7 per cent, with several across south-east Queensland forced to sleep in their cars due to an increasingly challenging market.

Seven of the 12 units in the Rochedale South property are currently unoccupied, prompting a push for the government to put the units to use.

“I’ve even said to council, if you haven’t got anybody to occupy them, I’ll give you someone to occupy it,” Logan Ratepayers Association president Rod Shaw said.

Negotiations are underway for the council to sell the property to the state government.

The State Housing Department has signed a lease to take over the vacant units and provide more social housing.

New tenants are expected to move in by the end of this month.