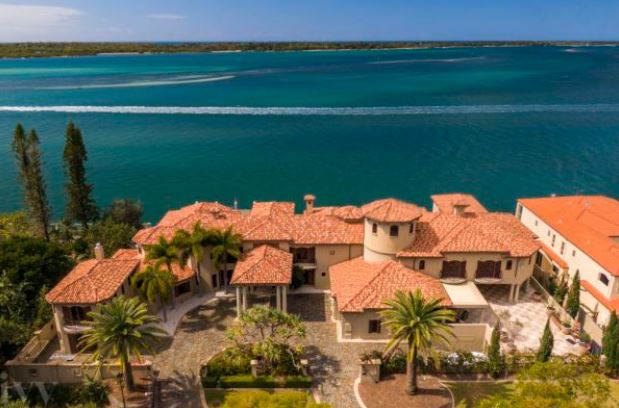 A sprawling waterfront mansion on the Gold Coast has sold for more than $14 million, setting a suburb record after more than eight months on the market.

The Grand Vista mansion on the Gold Coast’s Sovereign Islands, a gated island community in Paradise Point, sold for $14.18 million on Monday to a Melbourne family looking to relocate north.

The Mediterranean inspired mansion sold through Ivy Wu and Isaac Kim of Ivy Realty more than eight months after it was originally listed for sale in September with a $16 million asking price.

While the property did not reach that figure, the result was still well above the $11.05 million — the previous suburb record — that the sellers paid for it back in 2018. 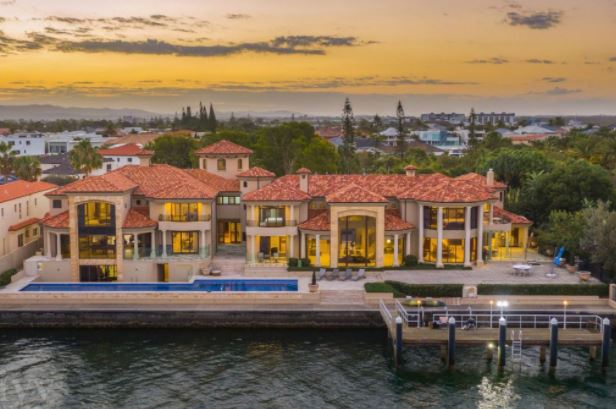 The sprawling waterfront mansion has seven bedrooms and 12 bathrooms.

“The [sellers] bought it well, and after they bought, they made a lot of improvements, adding a wine cellar and a new jetty, and making cosmetic changes,” Mr Kim said, adding they now hoped to downsize in the area.

Mr Kim had local, interstate and international interest in the property on Sir Lancelot Close, which is surrounded by manicured parklands and offers panoramic views from South Stradbroke Island to Surfers Paradise.

“It’s very private, which people love, almost like a hidden gem,” Mr Kim said. “We did about 20 inspections and had multiple offers, which quite surprised me because before COVID, it was not easy to find a buyer in this price range … but the way that people think has changed and those who have always wanted extra space and extra land are going for it.” 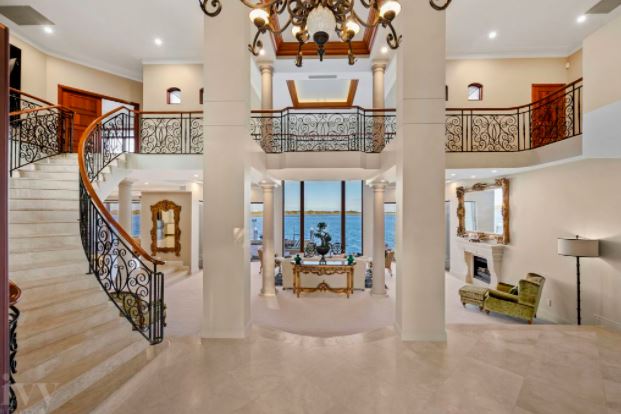 The home spans three levels and sits on a 2103-square-metre block, with 55 metres of Broadwater frontage. It has seven bedrooms with en suites, including a self-contained suite for guests or staff. There are 12 bathrooms in total throughout the three-storey home and parking for 19 cars – including basement parking for eight cars.

The home is perfect for entertaining, with a gourmet kitchen with European appliances and a mix of formal and casual living spaces, including a grand dining and living room, another lounge and a bar.

Then there’s the al fresco entertaining area, an outdoor kitchen, multiple outdoor terraces, as well as a 3600+ bottle temperature-controlled wine cellar, an elevator, a 25-metre lap pool, a gym and a steam room. 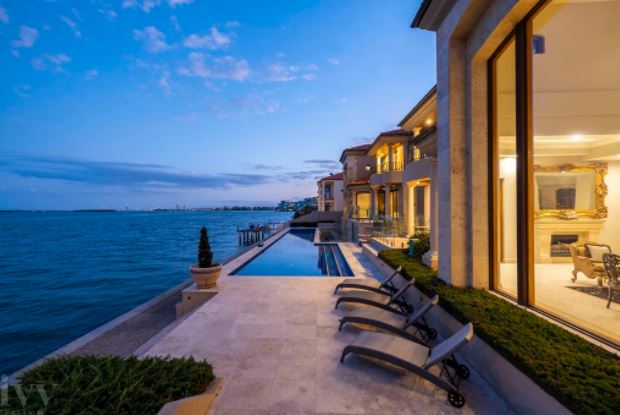 The waterfront home has a 25m lap pool.

The mansion was once owned by former Gold Coast developer John Fish, who reportedly spent millions of dollars on extensions and renovations after purchasing the luxury home for $6.5 million in 2003. The home sold for $7 million at auction in 2010, after a $9.2 million contract fell over, and it went into the hands of receivers. It was bought by businessman Brian Peat at less than half the initial $15 million asking price in mid-2009.

The sale comes less than two weeks after a six-bedroom, seven-bathroom waterfront home at the opposite end of Sovereign Islands sold under the hammer for $7 million.

The Knightsbridge Parade property was just down the road from a lavish trophy home that hit the market for about $44 million back in 2019. The property, on a whopping 3477-square-metre waterfront block, remains on the market, despite a price drop to $36 million in late 2020. The property last sold for $5.3 million in 2013, when it was a half-completed house. 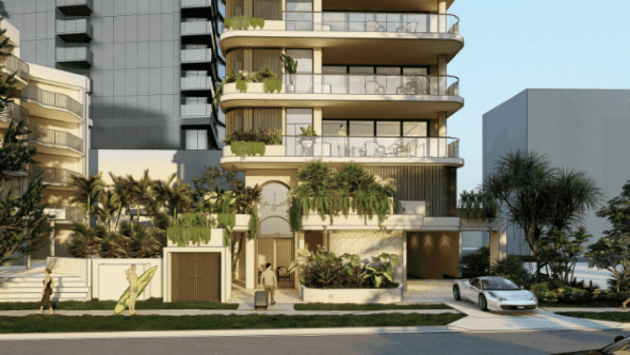 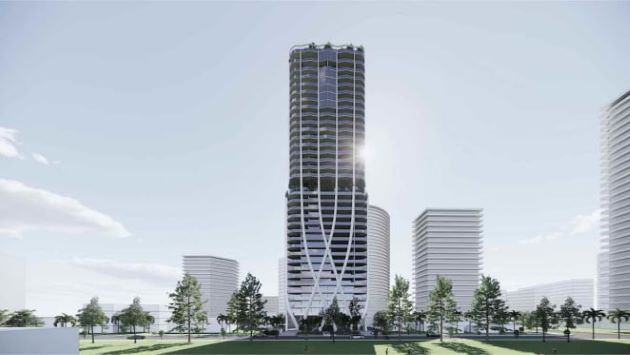 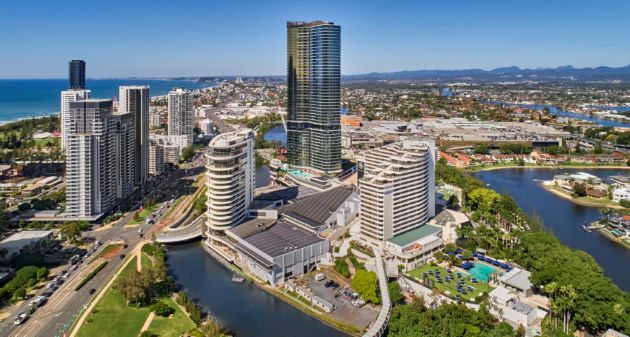 The first residents who will live, as well as play, at The Star Casino on the Gold Coast are preparing to move in with all 422 apartments in the upper levels of The Star’s new $178m hotel and apartments tower sold out.

All apartments in the second $400m tower under construction and due for completion in 2024 have also sold, which means all 879 residential apartments across both towers have sold out in the scorching hot Gold Coast property market.

It is the first time that people are able to lay their money down to live at the casino.

The residential influx ushers in a new era of high-rolling in-casino living in Queensland, with the Gold Coast and Brisbane upping the ante on luxury integrated resort lifestyle offerings.

The sell-out also signals some good news for The Star amid damning ongoing compliance hearings surrounding The Star’s casino operations and an exodus of The Star Entertainment Group senior executives.

The luxury residential apartments join the startling upsurge of hotel rooms in the rapidly-developing tower builds on the Gold Coast casino’s Broadbeach island.

As well as residences, the new builds also bring around 900 apartments to the short-term holiday rental pool. Combined, the four towers on the island also mean The Star precinct will offer nearly 1200 hotel rooms and suites.

“Investors were out in force over the past summer with 80 per cent of the purchasers in the second tower being locals looking for a second investment,” Cali said.

“Remote and decentralised working arrangements as a result of the pandemic have seen investors attracted to a lifestyle where they have the convenience of dining and other facilities right on their doorstep.”

With the flurry of tower construction, the casino location is almost unrecognisable compared to a few short years ago.

Two new towers sit alongside the existing The Star Grand hotel and The Darling hotel.

The 53-storey Dorsett hotel is joined by the new $400 million 63-storey tower, which is as yet unnamed.

Under a $2 billion expanded masterplan, approved by the Queensland Government in November 2018, The Star could move to construct yet another three hotel towers to complement the current four.

The masterplan is being overseen by Destination Gold Coast Consortium—the joint venture between The Star, Chow Tai Fook Enterprises, and Far East Consortium.